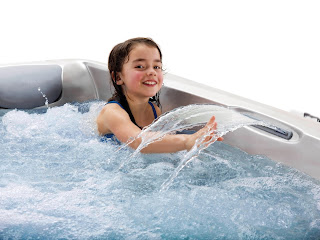 ......Absolutely! Many places in California are not as hot as California's Central Valley and the thought of continued use of  a hot tub in the summer doesn't come up, it simply get's used. Many years into assisting customers at the Energy House I noticed a trend, hot tubs were not getting used in the summer months. In fact, hot tubs were being shut down in the summer similar to the way they are winterized  in the eastern part of the US. This was a little puzzling to me here is "America's next great appliance" is sitting in perfectly good condition.....shut completely down like a snow blower.

We'll one day I happened to ask a customer that I knew had both a pool and a spa from Energy House how they are enjoying their spa. The answer was "we don't use our spa in the summer." I asked "why?" and the answer was "it's too hot."  I replied "too hot?" then asked "the weather, or the spa?" He said both. I asked if he'd ever thought of turning the temperature down on the spa. He replied "I never thought of that....."

As it turns out, this thought of spas and summer time not being a match was very common. And as the years went by staff has been educating customers on how they can enjoy their hot tubs all year around. It's simple just turn the temp all the way down and add a slightly folded face towel on the bar top to allow heat generated by direct sunlight to escape. And there you go!

There is nothing better than a cool refreshing body massage, and right in the comfort of your own backyard. Just because it's called a hot tub doesn't mean you have to keep the heat jacked up to infinity in the summer. Hot tubs and hot weather? Absolutely,turn it down and enjoy! 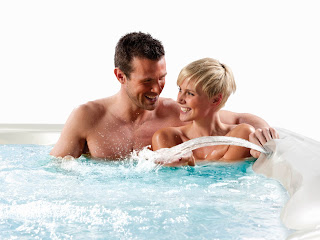